Decision Making Disasters: how egocentric bias and lack of objective analysis can ruin careers and organizations

Imagine… you are getting your haircut at the local barber, and fortuitously become acquainted with a famous movie producer getting a trim next to you. So impressed by your personality, he invites you to audition for the lead role in the next movie of a blockbuster action-series. You nail the audition and accept the offer. Shooting is completed and the movie released with a record-breaking performance at the box office.

What is your next move? 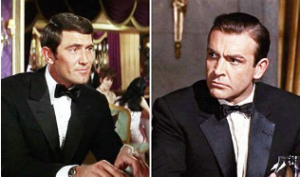 orge Lazenby (let me google Google that name) that was the end of the road for his role as James Bond in 1969. This opened the door for an emerging Sean Connery (no need to Google this one) to return as Agent 007 and launch an illustrious career spanning decades.

Poor decision making is something we witness every day of our lives. Sometimes, this can be attributable to the lack of data or business intelligence at our disposal, but oftentimes is due to any one of the numerous cognitive biases we have. In George’s case, this can be associated with egocentric bias in not being able to adjust to the creative direction of the movie On Her Majesty’s Secret Service. He felt there were too many “gadgets” in the film (great foresight there) and that he was not being listened to, even though he’d had no prior stage training nor acting experience!

For others, its sometimes the pain and suffering of being on the receiving-end of poor decisions (take note Managers). For instance, Elvis Presley’s manager forbade him to tour internationally at the peak of his musical powers. For self-serving and ill-informed reasons, tied to his illegal-residency status among others, his manager (a carnival worker by trade) continuously exploited Elvis. Selfishly having him focus on cheesy-films and the Vegas circuit, rather than lucrative international tours, cost The King dearly. It is reported Elvis never questioned this unethical and greedy management guidance that he received.

As we know poor management decisions are also rife in the commercial sphere. One of the most infamous examples, amongst a countless litany, is Excite’s (who?) refusal to acquire Google in 1999. There are conflicting versions of this event, but the bottom line is the Excite’s CEO rejected an offer to buy Google for $750,000. This was after negotiating down an initial offer of $1m. Today, it has become a $1trillion company. Undeniably, there are multiple factors that have contributed to Google’s subsequent success. Be that as it may, Excite passed on the opportunity to get their hands on the nascent company’s famous algorithm which had performed better in the like-for-like ‘bake off’ Executives had conducted between the two search engines.

One person that did make amends and learnt from their poor judgement was Dick Rowe. As Head of A&R at Decca Records, he was presented with a hole-in-one opportunity to sign up The Beatles before their breakout. He rejected this infamously rationalizing “guitar groups are on their way out”. Similar to Excite’s CEO, analyzing the thought process behind such decisions is a perplexing task.

Here, it is incumbent upon leaders, managers, teams and even parents; to ensure they are able to base their decision making on a more rigorous set of inputs, processes, and contexts. Analytics and business intelligence systems (check that device buzzing in your pocket), play an important part in this process. Just as important, are one’s ability to manage the lens in which they view the world – their cognitive biases. As are your sense of curiosity and humility in seeking multiple perspectives from others, across multiple vantage points.

Learning from these and other lessons is also critical to how we can become better decision makers. Thankfully for Dick Rowe, and our collective listening pleasure, he did redeem himself by signing up the Rolling Stones for their first record deal.